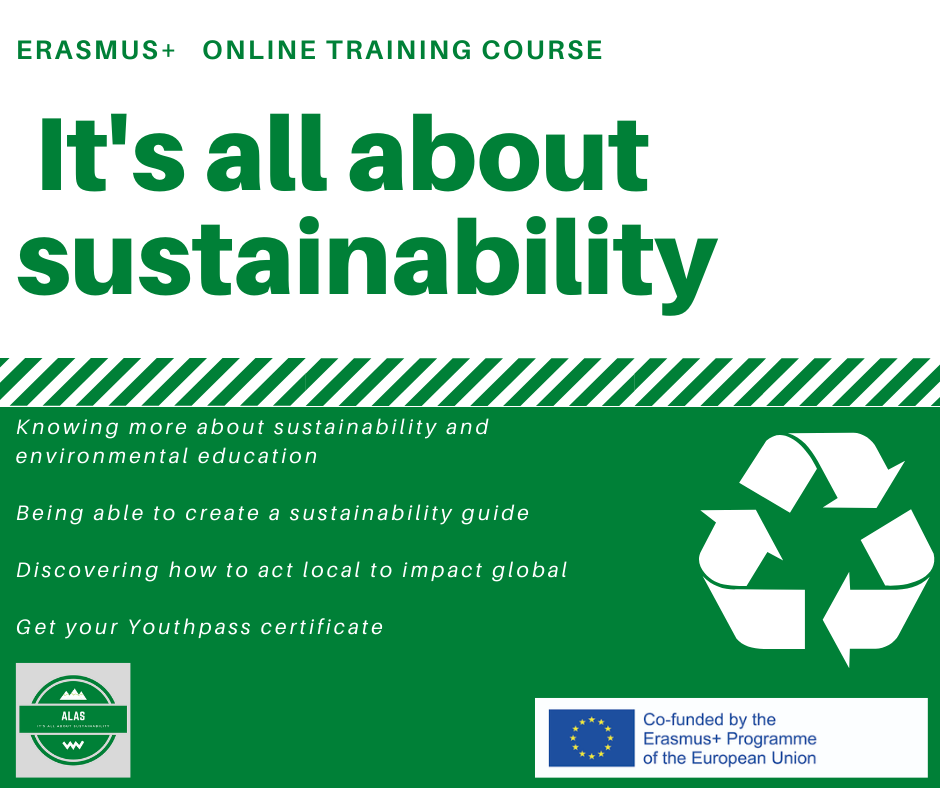 The online training course within the ALAS project had a total duration of 10 days, and involved a total of 33 people, including participants, trainers and facilitators. The ALAS project is a mobility project for young people and youth workers, whose main goal is to empower youth and raise awareness in terms of sustainability and to promote entrepreneurship under the prism of respect for the environmental protection. The project is implemented by a consortium led by Backslash (Spain), together with Balkan Urban Movement (Serbia), Ampersand (North Macedonia), Network for European Citizenship and Identity (Cyprus), Celje Youth Center (Slovenia), New Horizons (Italy). Despite not being a part of the Consortium, CONNECT International is supporting the dissemination of this project due to our rich experience in the online and offline promotion of project results, as well as due to the fact that Balkan Urban Movement, Backslash and New Horizons are members of our network.

In total, each partner organization had 5 participants in the course, and for the total of the training, two trainers and a facilitator were needed, the latter being also in charge of being the reference person and with training in group management and conflict resolution . The main objective of this training course was to empower youth and raise awareness in terms of sustainability, to result in a change in their habits, especially within their entities, and a promotion of entrepreneurship under the prism of respect for the environment.

From the ALAS project, it was proposed at all times that this search for sustainability be made from the personal experiences within the associations or entities of each of the participants, promoting an analysis of the reality of the same with the aim of improving it. The search for solutions and, during this, learning and raising awareness about environmental problems, were the tools to empower young people and include that vision in a lasting way, so that new motivations were opened in terms of undertaking their own projects. . To achieve this main objective, one of the themes that he worked on throughout the project is the knowledge and awareness of environmental problems at a global level and the search for solutions to it through the deepening of the concept of sustainability.

We think that it is essential to create an awareness of the current problem, in which the causes and effects are analyzed, before delving into the concept of sustainability. In order to provide this knowledge and awareness, during the first day of the training course an overview based on data and scientific studies was given on the problem of climate change and associated global warming. Parallel to this, another of the things that were basic in this training course is the methodology that will be used. We think that in order to assimilate the concepts and solutions, both have to be reasoned and reflected by the participants themselves, making them see examples in their closest realities.

For this reason, a methodology was used that promoted reflection, debate and analysis of reality at all times. In this way, critical thinking and the autonomy of young people were fostered, which led to their greater empowerment. This became visible in the evolution of participation during the course, especially in the time of intervention of some people and the proposals they made.

Another fundamental leg of the training course was the promotion of entrepreneurship. If the objectives, policies and actions at European level regarding the environment and sustainable management of resources are observed, many of them are aimed at promoting companies and, in general, an economy with a commitment to the environment and that integrates the green vision . It is impossible to reach that horizon if you do not educate yourself on this. For this reason, while we were talking and analyzing environmental terms, what is entrepreneurship and how to undertake was also presented, thus favoring a greener future for future projects.

Finally, being able to carry out an international collaboration between all partner organizations not only favors a much more extensive future collaboration network, but also provides the vision of different realities and cultures. In this way, during the course different realities were presented and how things are developed in different countries, providing the participants with the ability to listen, debate and empathize. At Backslash we firmly believe that everything should always be viewed from the prism of diversity, and we think that this course was able to bring that way of seeing things closer to the young participants.

This project is supported by the Erasmus+ Programme of the European Union.