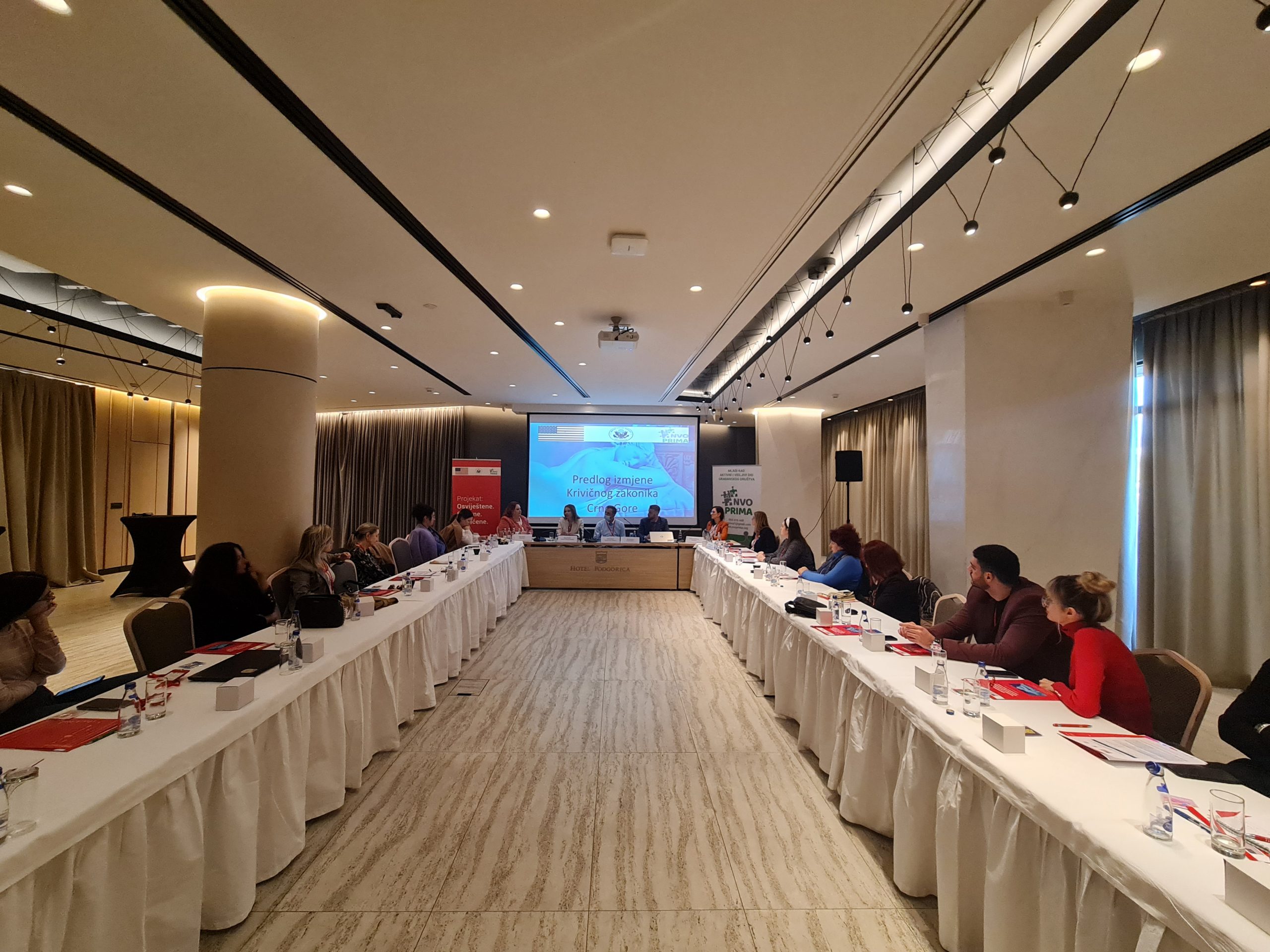 Aida Perović from NGO Prima presented a proposal for a new criminal offense “Misuse of someone else’s recording, photograph, portrait, audio recording or file with sexually explicit content”, which will soon be presented to the members of parliament in the Parliament of Montenegro.

“In the proposal for changes to the Criminal Code of Montenegro, in article 175a, we foresee a prison sentence of up to two years if a person makes available to a third party a video or other recording, photograph, portrait, audio recording or file with sexually explicit content, without the consent of the person to whom the file refers , i.e. without the consent of the person shown in the video, photo or portrait or whose voice was recorded on the audio recording, i.e. up to 3 years if the criminal offense was committed via the Internet. Also, we anticipate stricter penalties if this criminal offense is committed by an official, a prison sentence of up to 4 years, or 5 years if the criminal offense is committed via the Internet. Recordings, photographs, portraits, audio recordings and files, as well as special devices with which the criminal offense referred to in this article was committed, will be confiscated”, explained Perović.

Also, Perović thanked the US Embassy in Podgorica for recognizing the importance of this topic for the further democratization of Montenegrin society, for the development of Montenegro as an environment in which we are fully aware that gender-based violence and revenge pornography do not happen to someone else, but that they are ubiquitous, especially due to abuse high-tech communication platforms.
In the opening part of the conference, the US ambassador in Podgorica, Judy Reising Reinke, addressed the attendees, who emphasized how important it is to fight gender-based violence unitedly: “The global theme of this year’s ’16 days of activism against gender-based violence’ is ‘Let’s unite!’ Activism to end violence against women and girls’. Therefore, I invite you all to unite in the fight against all kinds of violence against women and girls, who are often the most vulnerable part of our societies, and that fight includes the fight against the distribution of intimate material online, without the consent of the victim.”

In the introductory part, the State Secretary in the Ministry of Justice, Mr. Bojan Božović, spoke and stated that in Montenegro, gender-based violence is discussed only when it becomes so obvious and public that we can no longer remain silent: “In the Ministry of Justice, we formed a working group that dealt with this topic as well and I must say that I am grateful for how it was brought to an end. We are waiting for the opinion of the European Commission, and with these changes we have created a broad consensus and we all agree that the introduction of this criminal offense is necessary”, stated Božović.

Aleksandra Gligorović, senior researcher at NGO Prima, presented the Basic Study “Revenge Pornography in Criminal Laws”, which presents an analysis of the criminal codes of countries in the region and Europe that have this criminal offense recognized in law. Gligorović explained that 11 countries in the European Union have laws regarding this criminal act, and cited Germany as one of the best examples.

On the Panel “Revenge pornography as gender-based violence in the judicial, prosecutorial, police and psychological practice of Montenegro”, Goran Đuković, Judge of the Basic Court in Podgorica, spoke, who stated that he personally supports the changes to the Criminal Code, and that they have a legal basis. in Article 8 of the European Convention on Human Rights.

Biljana Pavličić, the public prosecutor, spoke about the cases she worked on and where there were elements of this criminal act. She pointed out that the amendment of the Criminal Code is extremely important in order for the victims to feel safer because they are protected in this way, and when the perpetrators are punished accordingly, they should be punished and not as it is now, given that this crime is currently can be treated exclusively by means of a private lawsuit, and not by official duty.

Master Jakša Backović from the Police Administration explained in more detail the phenomenon of revenge pornography and the forms in which it can occur, as well as that the victims are mostly women and the perpetrators are men.

“Until now, we have dealt with 6 criminal offenses from the Criminal Code of Montenegro, and with the proposed amendments to the Code, all these offenses can be combined, which would facilitate communication between the police and the prosecutor’s office,” explained Backović.

Katarina Vukadinović, a psychologist from the NGO Prima, spoke about the consequences of revenge pornography and shared her experience of working with victims in the psychological counseling center of the NGO Prima. She pointed out that the consequences of revenge pornography are equally serious as in cases of other forms of gender-based violence, but also that the worst outcome is the victim’s suicide due to the inability to receive adequate help and support.

The conference was held on November 28, 2022 in Podgorica.